From landfills that were bursting at the seams to remarkably clean cities, Taiwan’s changing attitude to waste has transformed the island’s streets.W

Waste researcher Nate Maynard remembers exactly when he realised that bins were nearly impossible to find in Taiwan’s capital city, Taipei. He first came to Taiwan in 2013 for a research trip as part of his environment masters programme. “When I arrived, the most obvious thing to me was that not only were there no litter bins, there was no litter either.”

The situation was vastly different 20 years before, after accelerated economic progress saw Taiwan lauded as one of Asia’s economic tigers, along with Hong Kong, Singapore and South Korea. But the price of economic success was high. Archive news reports say that in 1979, local governments were gathering up 8,800 metric tonnes of municipal solid waste a day. By 1990, that number had hit 18,800 tonnes. In 1992, it was still climbing, at 21,900 tonnes. Taiwan had acquired the unpleasant nickname of “garbage island”.

A total of 90% of the waste collected was heading straight into landfills that didn’t meet government sanitation requirements. Nearly all of the island’s landfills were at capacity, brimming with commercial and industrial waste. In one instance, officials from the former Taipei suburb of Hsinchuang – which today is part of New Taipei City – were having to dump 5,000 metric tonnes of trash in one go at an emergency site near Hsinchuang’s water pumping station, because its original landfill was causing a stench. The situation was so dire officials were worried that poor sanitation conditions would lead to an outbreak of dengue fever.

The island’s problems remained unresolved three years later and by then, Taiwan’s landfills – which numbered more than 400 – had either reached capacity or were close to it. Residents from different parts of the island were up in arms over what they saw as the government’s inability to tackle the region’s rubbish disposal crisis. By 1996, residents across several cities and townships were either blockading landfills or preventing new ones from being built, in an attempt to keep trash from flowing in.

That year, riot police had to be mobilised when more than a hundred residents tried to keep a procession of rubbish trucks from accessing the Hsingchingpu landfill in southern Taiwan.

The reality is, after martial law ended, people were allowed to protest,” says Maynard, who is now a research associate at the Chung-Hua Institution for Economic Research specialising in the circular economy. “Trash is an obvious, visual problem, and the people felt they could do something, and they did, so they came together.”

The residents were tired of dealing with air and groundwater pollution arising from the ill-designed dumpsite, and they were furious that the government was using the landfill, even after their lease had expired. It was around this time that the people decided that they had been pushed past the limit, and they were ready to act.

There was a major trash issue that had been building up because there was not enough landfill space, so [officials] wanted to build more, but the people weren’t happy about that – and they could protest,” says Maynard. And the protests did elicit a response from the government – but not the one that the protesters wanted. “The government responded by building waste incinerators, and the people protested again, because they didn’t want any of those either.”

To appease non-government groups who had pushed for action over the region’s waste problems, Maynard says the government looked to Japan, South Korea and Europe to see what they could learn from them, and so that officials could decide on a policy that could be a fit for Taiwan. One of these NGOs, Homemakers United, began as a group of women meeting informally to discuss Taiwan’s environmental problems. It then decided to take to the streets to call for the Environmental Protection Agency to start up a municipal recycling system. The group had wanted to show officials that it was possible to both recycle and compost Taiwan’s municipal waste. Officials have since singled out Homemakers Union as an important catalyst to changes in government policy on municipal waste.

In the end, lawmakers laid the groundwork for a program that would clean up the region by passing its Waste Disposal Act in 1998. The landmark legislation made recycling and waste reduction a priority, and it introduced an Extended Producer Responsibility scheme, the funds from which would go into a government pot that would be used to build out waste management or recycling facilities. Now, Taiwan’s recycling rate is one of the best in the world.

There was a second program, one which would eventually trigger the disappearance of Taiwan’s public rubbish bins. “The Pay-As-You-Throw scheme, which made people pay for household waste, [actually] created an incentive for people to cheat and use public bins [to dispose of household waste],” Maynard says. When public bins were taken away, they were replaced with regularly scheduled rounds carried out by the city government’s singing rubbish collection trucks.

Shu-Han Lu, who works with the Taiwan government’s Sports Administration, remembers when most of the city’s rubbish bins were taken away. “The government really didn’t give us much advance notice, but we didn’t really need it, because by the time the city government took the rubbish bins away, we knew exactly what the roadside bins were for.”

Maynard admits that removing bins was another manifestation of Taiwan’s good waste policy, but it didn’t really do much to improve the country’s overall recycling rate. What it did do was raise local consumer awareness that today extends beyond the need to recycle. “Having less bins around and waiting for the trash trucks forces you to consider your waste. You can’t just put all that into a bin and forget about it. And if you think about your waste, you will change your purchasing habits, you’ll end up not buying things that you can’t recycle.”

Lu agrees. “Getting rid of trash cans was a reminder that the bins weren’t there for people to dispose of their household rubbish in. It also gave us a chance to think about how much trash we generate, because we have to hold on to our waste until we see a bin, or when we get home,” she says.

Taipei today is not completely bin-free, and Hamoun Karami, a long-time resident of the city and entrepreneur who has created an Internet-of-things system that can turn regular waste bins into smart bins, says there should be a drive to keep those that remain. He argues that if the region gets rid of all its rubbish bins, it loses a potentially golden opportunity to understand the island’s waste-generation habits. 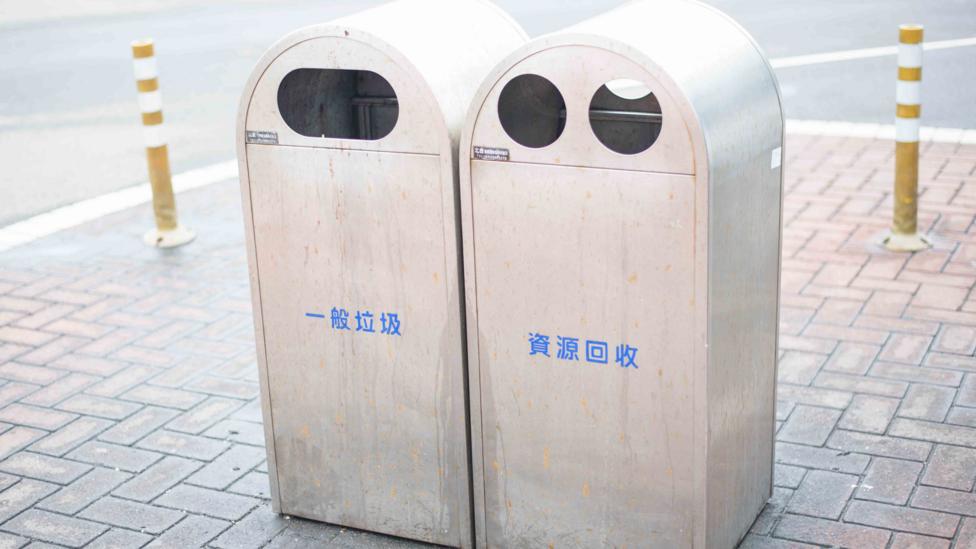 Bins can still be spotted on the streets of Taipei, but there are many fewer than there once were (Credit: Getty Images)

There are still around 1,700 bins scattered around Taipei’s more densely populated areas, Karami notes. With a population of 2.7 million residents, that means there’s already just one bin to every 1,500 people or so. “By simply getting rid of rubbish bins, we lose the opportunity to understand why waste is generated, where the bulk of it comes from and what we can possibly do about items that people throw away. The question people ask is, how we should be disposing of our waste? But the question we should be asking is, what is a better way to manage waste disposal?”

Over and above dumping bins and reducing waste slated for landfills, Karami says that there is a need to do more. “What we should be looking to do is understand our waste,” he says. He points out black spots in understanding of waste generation in Taipei. Recycling rates are lower in certain areas, but no one yet knows why – and there are no educational programmes on recycling provided for those areas, he says.

“If bins can be removed and the city can be a better place, then fantastic. But I have my doubts that this would be the case, and that we should try and find a better way to manage waste disposal, so that things are actually more efficient,” says Karami.

Instead of repositories for society’s discarded items, perhaps we should see Taipei’s bins as a precious resource – a measure of citizens’ consumption habits and environmental behaviours. And understanding those could help Taipei not just clean up its streets further, but also transition to a circular economy, which would lessen its need for landfills at all.