China has admitted its Covid vaccines do not work well – which could explain why Chile is suffering a resurgence despite having one of the best rollouts in the world.

In an extremely rare confession, the head of the Chinese Centre for Disease Control and Prevention, Gao Fu, said the jabs ‘don’t have very high protection rates’ against coronavirus symptoms. They are being used in at least 45 countries.

He gave no specific details, but a University of Chile study found China’s CoronaVac jab was only 3 per cent effective in the 28 days between the first and second doses, rising to 56.5 per cent two weeks after the second dose. Mr Fu has since told state media that his comments were ‘completely misunderstood’.

Chile has ordered 60million doses of the vaccine, manufactured by Sinovac, and has fully vaccinated more than a fifth of its population with the jab.

It may explain why Chile is suffering a severe Covid surge, despite having one of the highest global vaccination rates. Almost 40 per cent of the nation’s 19million people have already been jabbed.

The development is significant because No10’s scientists in the UK had pointed to Chile as a cautionary tale for those looking to end lockdown sooner.

Chief medical officer Chris Whitty told a Downing Street press conference last week: ‘We want to do things in a steady way because the assumption that just because you vaccinate lots of people, then the problem goes away, I think Chile is quite a good corrective to that.’

Britain is using the Pfizer and AstraZeneca jabs which far outperformed the Chinese vaccines in clinical trials and appear to be just as effective in the real world.

Analysis by Public Health England suggests they prevent more than 70 per cent of people becoming infected, and reduce deaths and hospital admissions by more than 90 per cent, after two doses. 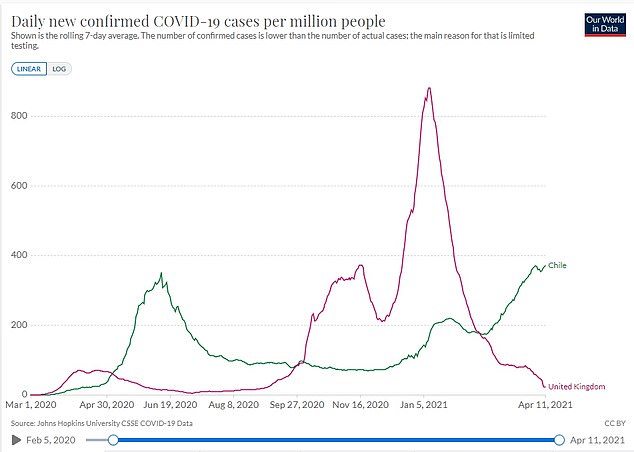 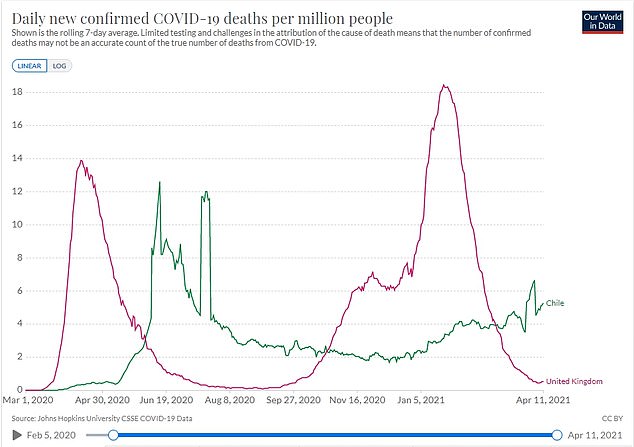 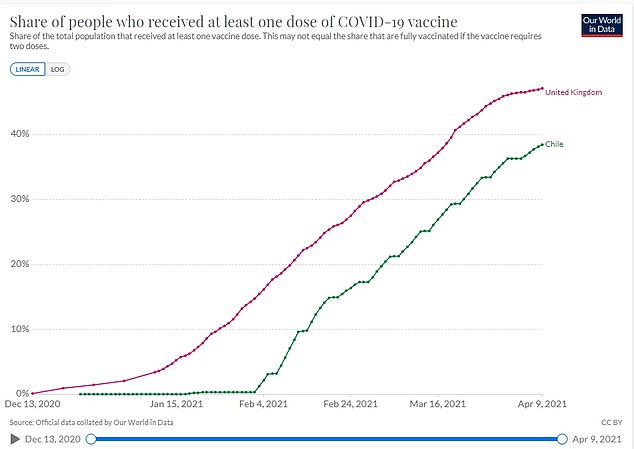 The director of the Chinese Centre for Disease Control and Prevention, Gao Fu, (pictured) said the vaccines made in China ‘don’t have very high protection rates’ against covid symptoms

China has exported hundreds of millions of jabs made by state-owned firms mainly to Asia, Africa and Latin America, but also to Hungary and Turkey.

He said: ‘It’s now under formal consideration whether we should use different vaccines from different technical lines for the immunisation process.’

According to the Associated Press, vaccines made by two state-owned drugs firms, Sinovac and Sinopharm, have been exported to at least 45 countries, mainly in Asia, Africa and Latin America.

These vaccines are based on an inactivated virus – a similar model to that used by the Oxford/AstraZeneca jab.

But they do not target the distinctive ‘spike’ protein of Covid.

Experts say that mixing vaccines, or increasing the number of doses, might boost effectiveness.

Researchers in Britain are studying a possible combination of the Pfizer/BioNTech and Oxford/AstraZeneca vaccines.

The UAE recently experimented with administering three shots of China’s Sinopharm vaccine, instead of two, over reports of low numbers of antibodies.

The effectiveness of the Sinovac jab at preventing symptomatic infections after both doses was found to be as low as 50.4 per cent by researchers in Brazil. Trials showed Sinopharm’s vaccine was around 79 per cent effective. 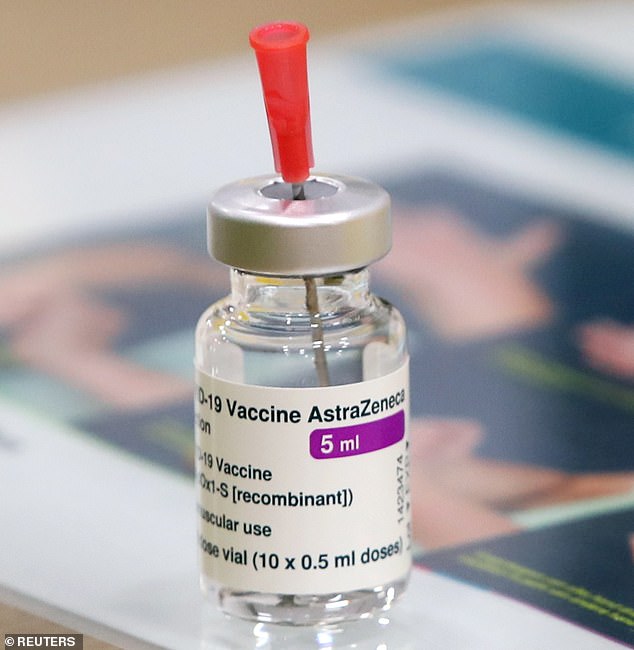 By comparison, the Pfizer/BioNTech vaccine has been found to be 97 per cent effective.

And study by the University of Chile found that efficacy in the 28 days between the first and second dose was only three per cent.

Chilean science minister Andres Couve said it was important to focus on the data and the vaccine’s effectiveness in reducing illness that required medical treatment or being hospitalized or dying, which it achieved in the Brazilian study in 83.7 per cent and 100 per cent of cases, respectively.

He said Chile’s health ministry will shortly publish a real world study on the efficacy of both vaccines rolled out in its population and appealed to Chileans to continue to participate in the vaccination programme.

‘The University of Chile study and the study the health ministry will release say the same thing: the number of people who fall ill and are hospitalized has decreased,’ he told local newspaper La Tercera. ‘We are going down the right path.’

British scientists told MailOnline as long as a month ago that a weak vaccine could be behind Chile’s spiralling cases.

Professor Ian Jones, a virologist at Reading University, said: ‘If half the population is vaccinated and the vaccine is 50 per cent effective (or less after one dose) then in effect the majority of the population was still susceptible, at least to infection, as the virus took off again.’

Yet some experts have still pointed to Chile as a warning that easing restrictions in the UK too soon could lead to another nasty virus surge.

Sir David King, former chief scientific adviser to the Government, told Sky News today: ‘From the point of view of the population itself, we’re all dying to get out of lockdown.

‘From the point of view of the epidemic, I think it’s all a little bit more worrying.’

He added: ‘Chile is a country where the rate of vaccination amongst the population was third highest in the world – they were ahead of us in terms of the number of people who have had the vaccine – and they’re suddenly now into a third wave.

‘They now have 7,600 cases a day and the total number of people in Chile now who have Covid is over a million.

‘So what has happened in Chile is very, very surprising – a high percentage of people have been vaccinated, but here’s a variant of the disease coming through the country.’

Smarter Energy for a Better Life