Skip to content
You are here
Spread the love

The rise of gas prices could act as a catalyst for oil demand and thus more cargoes for oil tankers, should more countries opt for oil-based supplies for their winter needs. A cold winter could also play its part. In its latest weekly report, shipbroker Gibson said that “the current strength in gas prices is having major ramifications for global energy markets. Record prices in Europe and Asia are forcing utility firms to look for alternative energy sources and have pushed some companies into bankruptcy. Many have been forced to burn more coal despite the environmental consequences, whilst oil-based fuels will also receive a demand boost in regions where oil fired power capacity still exists. With oil demand expected to find some support, could tankers finally receive the catalyst they have been longing for?” 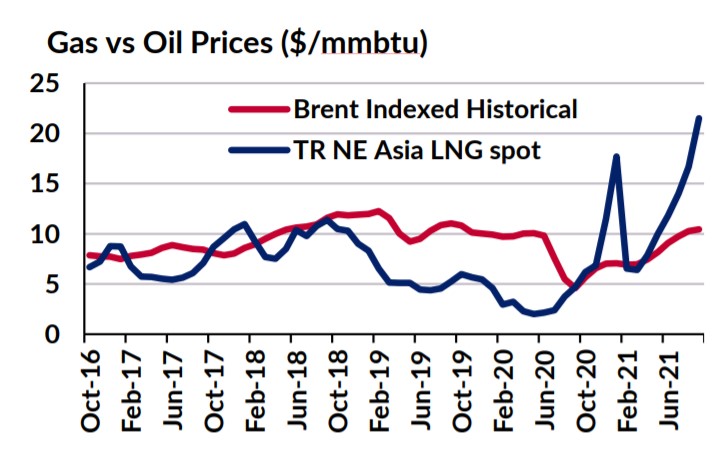 According to Gibson, “the answer to this question depends on the scale of the demand increase, which Goldman Sachs estimate could equate to a near 1% uptick in global oil consumption. However, this would depend on a ‘cold winter’ and would also likely be focused East of Suez where oil-based fuels have greater potential to form part of the power generation market. High sulphur fuel oil (HSFO) is expected to be the primary beneficiary of the oil-based fuels. Countries including Pakistan and Bangladesh, as well as some Middle Eastern players have already been more active in the spot HSFO market as LNG prices began to rise in Q2. Now HSFO burn is also likely to increase in parts of East Asia, such as Japan where oil fired capacity is still available. However, higher HSFO prices and limited supply will eventually restrict this practice. Unlike East of Suez, Europe has limited capacity to burn HSFO for power generation (oil-based fuels generated just 1.8% of the EU’s electricity supply in 2019), so in Europe there is less potential for an increase in oil demand to offset higher gas prices”.

The shipbroker said that “higher HSFO prices could also potentially increase refining run rates, supporting crude demand. Fuel oil cracks, although still negative, are currently close to multi-month highs, which combined with stronger Asian gasoil and jet margins, could incentivize higher refining activity. Asian refiners may also seek to boost HSFO output through changes to refining slates/configurations if prices continue to find support from the gas market. Relatively stronger demand for HSFO in power generation in the East compared to the West should also offer some support for arbitrage flows. Typically, arbitrage flows ease this time of year as Middle East power generation demand falls in line with cooler temperatures. However, higher gas prices have the potential to support above average West to East HSFO flows this winter”.

Gibson added that “crude direct burn also has the potential to increase due to higher gas prices. This practice is most common in the Middle East, although regional players have sought to reduce the practice in recent years, shifting focus to ‘cheaper’ gas/LNG and HSFO. Now that the price relationship has changed and gas has a higher value, consumption of crude could find support once again. Whilst this would theoretically reduce the amount of crude available for export from the Middle East, this practice is expected to be limited. Many Middle East consumers of domestically produced gas lack the infrastructure to divert domestic volumes to the export markets and have a limited capacity to exploit the current strength in gas prices. Some are even importers of LNG and may switch to HSFO or crude once again”.

“For tankers, any increase in oil demand is positive. If demand continues to find support from firm gas prices, then tanker owners can expect to benefit from increased oil trade, be it increased HSFO trade, higher refining run rates or a boost in OPEC+ output. However, any increase in crude direct burn in the Middle East could offset some of the benefit. Any gas related demand increase is unlikely to be enough to return oil demand to pre-covid levels but could at least provide a temporary boost”, the shipbroker concluded.
Nikos Roussanoglou, Hellenic Shipping News Worldwide