Rural life, especially for the poor, is very difficult in terms of fuel and energy. Cheap and clean fuel is a major and urgent requirement for rural and semi-urban areas.

Moreover, local gas resources are going down necessitation imports of LNG resulting in foreign exchange drain in an environment of heavy current account deficit. Biogas, a local resource, can be an important source of fuel.

As a populous agricultural country with a population of more than 200 million, a vast amount of biomass is generated. Biogas potential from livestock manure alone has been estimated at a median value of 350 bcf as against 1400 bcf total gas consumption – 25 percent of the total gas consumption. Only rice stubble, currently a calamity, can yield 30 mmcfd of biogas or (224 million kg of bio-CNG).

Biogas has been on the agenda since the 1970s. In Pakistan, it was brought in the 1980s. Currently, the NRSP (National Rural Support Programme) and others are engaged in a support programme to popularize biogas. However, only 5000 biogas units have been installed as opposed to 5,000,000 units in India. Clearly, biogas has been neglected. There is no policy and no plan on it.

Biogas is mainly produced out of human excreta and cattle dung, although all kinds of biomass like crop residue, solid waste and sewerage can be utilized. Pakistan is one of the largest milk producers. A number of dairy farms have installed large biogas plants to fuel the requirements of associate industrial units. In Europe and elsewhere, large biogas plants have been installed using all kinds of biomass. Recently, Oman has installed a biogas plant as part of a large dairy farm there. Large-scale biogas has a marketing problem.

Biogas has limitations. Unprocessed, it can be burnt in stoves only, as it contains only 60 percent methane, the rest being CO2 and other gases. Secondly, it can be produced at or near the site of the biomass availability due to transportation issues. Manure has more limitations than crop residue which can be transported to longer distances. Briquette also offers some solution in this respect. Third, it has to be consumed at or near the production point. Normal biogas cannot be transported in pipelines due to its low energy content and extraneous materials. It has to be cleaned and processed to pipeline gas specifications.

Fourth, biogas units are expensive to install for a rural household. Household biogas unit has been costing more than Rs50,000 per unit and is a substantial construction project of sorts by rural standards, although cheaper plastic made versions are now available. The NRSP and other NGOs have been subsidizing the installation of Biogas reactors in rural areas and training masons and workers.

In Europe, they are cleaning and processing biogas and supplying to the gas pipeline network. At one time, there was a target of supplying 20 percent of gas demand through biogas.

A useful form of commercial biogas is bio-CNG. In India, biogas is being used as bio-CNG. Bio-CNG is nothing but biogas cleaned and processed to pipeline gas quality and calorific value. Bio-CNG is also being used in Sweden, where buses are running on it. Bio-CNG has been a recent phenomenon only. India has installed 17 units already. It is in the process of installing another 400 units. They have plans to install 5000 units in the next five years.

A typical bio-CNG unit, producing 8000 kgs of bio-CNG, costs INR4.5 crores. Bio-CNG is competitive with normal CNG and is being marketed at a lower price (INR35 per kg) than normal fossil CNG (INR45/kg) in India. CNG price in Pakistan, by comparison, is Rs25-138 per kg. Bio-CNG, if produced and marketed in Pakistan, should cost around Rs70 per kg.

On a larger scale, the Landhi cattle colony in Karachi is waiting for the installation of a large biogas plant despite IMF interest in financing it. K-Electric was supposed to buy the electricity generated out of the biogas and the fertilizer byproduct was to be sold to agricultural customers. Reportedly, mafias didn’t let them achieve an amicable formula of utilizing the dung. In the meantime, LNG and renewable energy like solar and wind have emerged as a competitive fuel. However, bio-CNG appears to be still feasible. The Ministry of Climate Change (MoCC) has shown interest in supplying bio-CNG to the Green Bus project in Karachi. There are six other cattle clusters in Karachi alone. Similar projects can be implemented in other major urban centers in the country. This can save foreign exchange and support hygiene.

Major urban centers can also install biogas and bio-CNG units at the sites of MSW (Municipal Solid Waste) centers and at sewerage processing plants. Both MSW and sewerage plants will improve their economics as well due to Biogas. At the current state of affairs, bio-CNG may be the only option to produce and market biogas, as pipeline transmission may be too far-fetched. Bio-CNG can be transported over short-to-medium distances though cascade trailers. Already, gas companies are considering replacing LNG-Air-Mix plants by the nCNG trailer system at some feasible places.

It appears, however, that the time for biogas for rural family households is gone due to higher upwards capital investment that cannot be afforded by individual households. Massive subsidy and credit may be required, which is partly the reason that biogas could not be expanded to rural areas, except in China and India.

There is a new technology of gasifier stoves, which may be more affordable than biogas. Biomass is burnt directly in these stoves. Gasifier stoves burn cleanly and consume 50 percent biomass than the ordinary biomass stoves. To say the least, a formidable competitor of biogas has emerged; more on this later. Commercial biogas may be more attractive. Processed and clean biogas is commercially competitive at a cost comparable with fossil natural gas ($6 /MMBtu). We have noted earlier that bio-CNG in India is cheaper than normal CNG.

Unfortunately, there is no owner of biogas in the government system. Consequently, there is no policy, no target and no plans or projects. Agricultural departments, local governments, oil and gas companies etc are all stakeholders. However, there has to be one lead agency. The petroleum division appears to be the most active and resourceful institution in the country. They may be entrusted or they may themselves move forward in this respect; after all, biogas is gas, which is their major business. Certainly, they can take a lead in bio-CNG.

For rural biogas development, local governments and agricultural departments may appear to be the relevant organizations to undertake it. The Punjab government should be interested. Punjab lacks gas resources of its own. However, it has the largest livestock population and other vegetable and waste biomass resources. The Ministry of Climate Change and provincial environment departments should be interested as most of biogas is currently released into the atmosphere impacting climate change.

However, the government of Pakistan at the very top may be required to develop an integrated policy framework, possibly tying in subsidies and credit in the process. In addition to increasing fuel supply and decreasing LNG imports, biogas will help control deforestation. 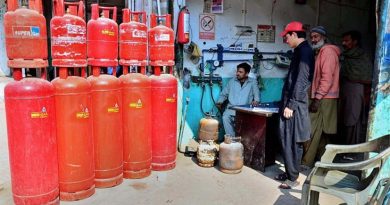